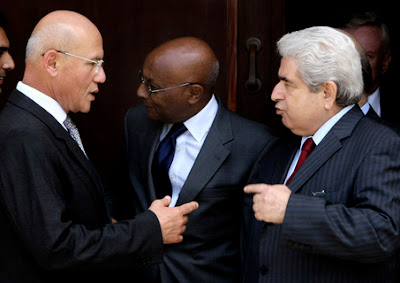 εσύ.. όχι εσύ..
Cyprus talks not so smooth
Hurriyet 2008
ANKARA - Turkish Cypriots are losing hope of reaching a negotiated settlement due to the Greek Cypriots’ lack of motivation. "The international community, especially the United Nations, should step in and put pressure on both parties," an official said. One of the main obstacles is the Greek Cypriot faction’s refusal to set a timetable for a solution. Three months on from the leaders of the Turkish and Greek Cypriot communities coming together for direct talks on ending the island’s four decade-old division, the most notable event in the proceedings is the parties’ failure to make any remarkable progress in negotiations. Mehmet Ali Talat and Demetris Christofias took the initiative to find a comprehensive settlement to the Cyprus problem under the auspices of the United Nations in early September. They discussed governance and power sharing and some other minor issues but due to the news blackout, not much has really been leaked to the press so far. Talat visited Ankara Thursday to inform the Turkish government about the talks. According to officials familiar with the talks, there are a couple of difficulties the parties face, in particular the Turkish Cypriots, during the negotiations. The first is the status of the Annan Plan, a complex blueprint suggesting a solution to the issue which was rejected in the 2004-dated referendum by the Greek Cypriots, and how it will be utilized by the parties in the talks. Greek side against timetable"The Greek Cypriots do not hesitate to use the Annan Plan when it’s to their advantage but when the plan suggests something in favor of Turkish Cypriots, they immediately deny the Annan Plan," an official said. "There is a real problem on the grounds on which talks will proceed." The second problem is the insistence of the Greek Cypriots of not setting a timetable for a solution. In the current scheme the talks seem to be open-ended, which creates a sense of anxiety for the Turkish Cypriots, who are isolated by the rest of the world. "We are in a hurry for the solution," the official stated, "because it’s us who are suffering under an unfair embargo. We really could not survive if Turkey was not supporting us in all means." Talat said Thursday that internationally recognized Greek Cyprus, a European Union member since 2004, did not need an immediate solution and have avoided agreeing on a certain deadline for the solution, according to the Anatolia news agency. "That’s why we call on the international community, the UN and the EU to intervene and to put pressure on parties to set a timetable for the solution," the official said. "They should come up and tell parties, for example, to reach a solution in two years time or otherwise be ready for the consequences." According to assessments here, Greek Cypriots will likely wait until late 2009 to make a decision, the time the EU will review the candidacy of Turkey, who until now has refused to keep its promise of opening its ports and airports to Greek Cypriot vessels and aircrafts. In 2006, the EU suspended the negotiations of eight chapters due to Turkey’s refusal to comply with the Ankara protocol and said it would review the situation in 2009. Another development frustrating Turkish Cypriots is the recent move of the Greek Cypriot government of signing a memorandum of understanding with Britain and Russia, both members of the UN Security Council. "The content of these documents are eroding the agreed principles between the two parties," an official said. One of the earlier principles was that the new federal state would be set by two constituent states, but the recent declaration with Russia does not foresee the existence of constituent states." Another major obstacle experienced in both the south and the north is the lack of motivation to find a solution among the people. The Turkish Cypriots seem less enthusiastic about the re-unification of the island, though more than 70 percent of them voted in favor of the Annan Plan. "Convincing the people is the most difficult," the official said.Governance and power sharing According to officials the parties entirely discussed the chapter of governance and power sharing and made some progress there. Turkish Cypriots agree on establishing a new federal state but demand equality in its largest possible sense in ruling the island. That is why they are insisting on the existence of two constituent states, which was not yet officially agreed by Greek Cypriots. "There is no total agreement on the competences of the federal state but a semi-agreement," the officials maintained. As for the executive, there is also disagreement between the parties. According to the Greek Cypriot proposal, a president will be elected by popular vote but it’s not going to be a presidential system. The Council of Ministers will have a say on many issues. The system will also have a vice-president which will rotate the presidency. The Greek Cypriots’ proposed rotation is to four-to-two, which allows the Turkish vice president to become president for only two years. The Turkish proposal, on the other hand, suggests a three-to-two system, which was not yet agreed on. Another controversial proposal from the Greek Cypriot is a single ticket system which will bring the Greek Cypriot presidential candidate and the Turkish Cypriot vice-presidential candidate together on the ticket. "What they are aiming at is to influence the presidential elections in the north, something which we see as very dangerous for the continuity of the new state," the official said.
-------------------------------------------
Δεν πάνε και τόσο καλά οι διαπραγματεύσεις σύμφωνα με τον Τουρκικό τύπο