28/10/2008 9:45 μμ.
At least 30,000 people are flooding a nearby refugee camp Fighters loyal to a Tutsi opposition general have seized control of an eastern town in the Democratic Republic of Congo, according to a spokesman for the movement. Troops from the National Congress.... 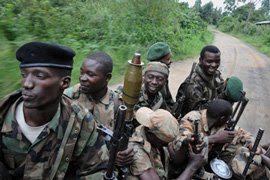 DR Congo rebels 'gain territory'
http://english.aljazeera.net/news/africa/2008/10/20081028181213494774.html
http://garizo.blogspot.com/2008/10/dr-congo-rebels-gain-territory.html
At least 30,000 people are flooding a nearby refugee camp
Fighters loyal to a Tutsi opposition general have seized control of an eastern town in the Democratic Republic of Congo, according to a spokesman for the movement.
Troops from the National Congress for the Defence of the People (CNDP) say they have taken Rutshuru as part of an offensive that has overwhelmed government forces and forced thousands of residents to flee. The CNDP, led by Laurent Nkunda, (http://en.wikipedia.org/wiki/Laurent_Nkunda ) is sweeping through North Kivu province and hopes to take Goma, the provincial capital. Bertrand Bisimwa, a CNDP spokesman, told Reuters by telephone on Tuesday: "We have taken the town of Rutshuru and the [adjoining] town of Kiwanja." Bisimwa's claim that CNDP fighters had surrounded Goma, 100km to the south of Rutshuru, has not been independently verified.
Thousands of civilians have fled to a relief camp in Kiribati, 10km north of Goma, in the wake of the attacks by the CNDP. About 30,000 people are now estimated to be sheltering there, trebling the camp's size compared to a few days ago. Amid the violence, UN peacekeepers have started evacuation plans for about 50 foreign aid workers from Rutshuru. A spokesman for OCHA, the UN humanitarian co-ordination agency, said of the plan: "It will leave today. Normally there are around 50 staff in Rutshuru and surrounding areas."
City threatened There are about 17,000 UN peacekeepers in DR Congo, attempting to prevent hostilities between the 5,000-strong CNDP and government forces. The CNDP says that army has links to the Democratic Forces for the Liberation of Rwanda (FDLR), a predominantly Hutu group which has about 10,000 fighters.
Joe Bavier, a freelance journalist working in North Kivu, told Al Jazeera that the anti-government offensive was rapidly taking control of territory. "For the last few days we have had fighting just north of the provincial capital, Goma. That calmed a bit, but now there has been a fresh offensive by the rebels, pushing north along the main road out of Goma towards Rutshuru," he said. "Rutshuru is one of four urban areas that Monuc has vowed to defend at all costs [but] today, UN humanitarian workers are preparing to evacuate the town."
'Heavy fighting'
The UN-backed Radio Okapi earlier reported clashes around Kibumba, 20km north of Goma.
The area saw heavy exchanges of fire on Monday, with Tutsi fighters saying that they had forced the Congolese army from their positions there. Both Rutshuru and Kibumba shelter tens of thousands of refugees displaced by years of fighting in eastern Congo. TheCNDP has already destroyed two UN armoured vehicles and forced thousands of civilians to flee south towards Goma. Bavier reported: "There has been very little information coming from the government or military sources in North Kivu. "Witnesses have seen [army soldiers] fleeing today from a town just north of Goma into the city itself, in a column of military vehicles. The government forces are relying on a UN peacekeeping force that is really in disarray at this point."
Local people, angered by the fighting and the failure of UN peacekeepers to prevent Nkunda's advance, rioted at the UN base in Goma on Monday and one person was killed, a UN spokesman said.
Thousands displaced
Ron Redmond, a spokesman for UNHCR, the UN relief agency, said on Tuesday that an estimated 30,000 displaced people had fled to camps near Goma. Reports suggested that Tutsi fighters were within 10km of Rutshuru [AFP]"It is chaos up there... These crowds of people coming down from the north have already started turning up there," he said. Redmond said the figures are based on estimates drawn up by statff from the UN High Commissioner for Refugees. "Many more could be on the way from areas further north that have been affected by the fighting in recent days," he told Al Jazeera, in a separate interview. The World Food Programme, the UN food agency, last week estimated that 200,000 people have been displaced in Nord-Kivu by violence which began at the end of August. Earlier this month, Ban Ki-moon, the UN secretary-general, urged the DRC government and Nkunda's government to observe an "effective" ceasefire and to co-operate for a separation of their forces. Michele Bonnardeaux, a UN spokesman, told Al Jazeera that the UN's mandate was "to support the national army in their effort to protect civilians there".
Lieutenant-General Vicente Diaz de Villegas "has indicated that for personal reasons he will not be able to continue with his assignment as planned", the UN told a regular news briefing. The appointment of Diaz as the commander of Munoc, the French acronym for the force, was announced on September 9. The UN said Diaz, a Spanish national, would be replaced as soon as possible and that Brigadier-General Ishmeel Ben Quartey, a Ghanaian, would serve as acting commander. Around 250,000 civilians have fled their homes in North Kivu since a peace deal collapsed in August. The UN says that about 850,000 people had been displaced in two years of sporadic fighting before the peace deal was signed in January. Congo's 1998-2003 war and resulting humanitarian crisis have caused the deaths of about 5.4 million people