Alexandria , Egypt - The night the capital of Hell fell down !!

The night the capital of Hell fell down !! 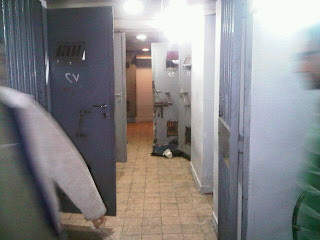 Underground cells by Yasser Seif
During the Mubarak era the state security HQ in Nasr city had this infamous reputation not only inside the country but also outside it. Its international infamousness was recognized when it turned out that the Bush administration used its secret cells and also the expertise of its infamous officers to interrogate its illegal detainees during its unholy war on terrorism.
The Egyptians called that big building in Nasr city district “The capital of hell” and you can imagine why Egyptians called it like that. A scary building any taxi driver will tell you horror stories about it and about the secret underground prison cells and torture rooms.

Tonight Egyptian protesters managed not to only to encircle the fearful building by thousands but they have also entered it for the first time not as detainees blindfolded but actually as victorious revolutionaries who had enough from that castle of terrorists. 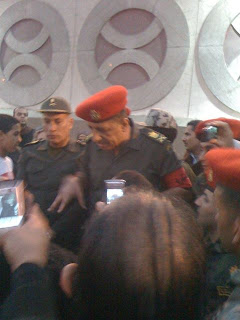 MP general and army general speaking
With protesters "Yasser Seif" As I hinted in the previous two posts about Alexandria SS HQand 6th of October SS HQ , protesters decided to protest only at the Nasr City SS HQ at 4 PM especially after knowing that the officers there are systematically getting rid from documents that can incriminate them. Some people say that the shredding and burning documents process started with the resignation of Shafik and the collapse of his cabinet while others say that that this systematic process was taking place since the fall of Habib Al Adly and his men.
Anyhow back to the capital of hell , the army evacuated the officers and officially was in control of it. After some negotiations with the generals , the people managed to get in and to see what they have never seen in their lives before from files , torture devices and underground prisons. After finding what they have found and the fact that Egypt will live in the new State security gate for weeks or even months as more and more scandals will come to light , I do not know why or how the generals let the people in. May be they let them in because they know that they were angry but did the generals know or even imagine what the people have there !!!? 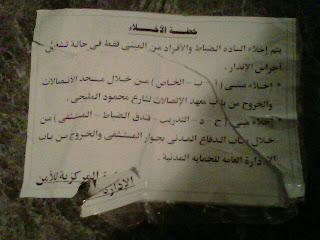 The evacuation plan showing how big it is
The sectors in brief "By Nada Ghonim" This is an inside tour for the capital of hell , first of all the building itself is so huge , too damn huge and it includes many branches ,hospital, officers’ hostel , training and cells underground !! It is like the SS own City Stars !! A historical trivial fact the capital of hell building was designed by Dr. Farouk Al-Gohary of Ain Shams university. His page in Marefara , our own Arabic Wikipedia is negative. According to our friends who went and are still there the building is quite luxurious. We do not exactly how may underground floors are there , some speak about 3 , other speak about 8 !! 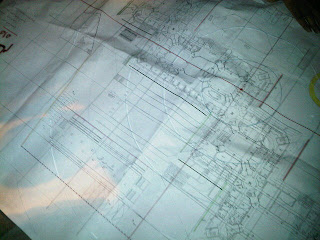 The blue prints of the capital of hell by Yasser Seif 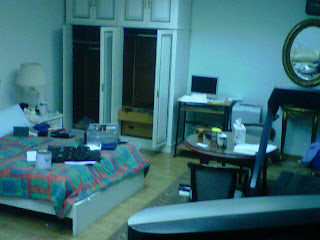 A bedroom at the hostel !! By Nada Ghonim 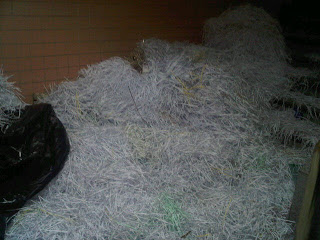 Loads of shredded papers by Tarek Al Araby Despite the oceans of shredded papers our friends have found at the HQ , they found very important files in the HQ.
I wonder what files the State security officers have actually destroyed. These are the files our tweep friends told us about : 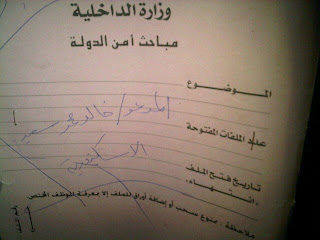 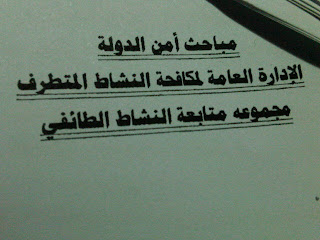 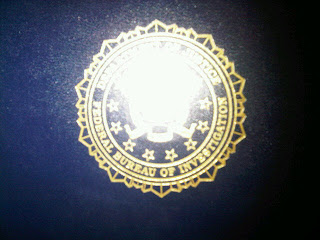 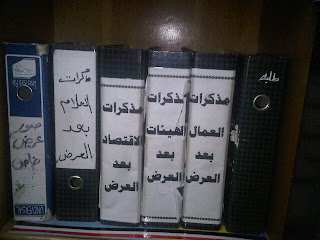 Folders about economy, labor, students, media
They were emptied. "Tarek Al Araby" Of course you will wonder why already these important files were kept , there are two theories : 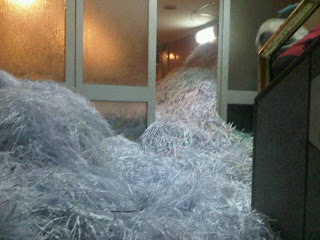 The mount of shredded papers !!
by Tarek Al Araby Of course our friends found computers but unfortunately without hard drives !! 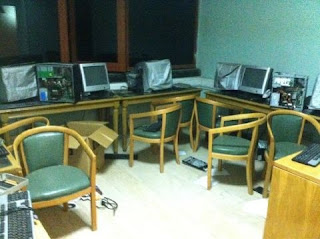 PCs without hard drives !! at least they covered
the monitors !! by Shady Anwar
Our friends found torture devices , sex films made for famous personalities "this is so Safwat Al Sherif !!" and also Sony PlayStation !! They also found weapons and some CSF officer who was so scared and told them that he was innocent. The officer was handed to the army.
The underground prison was hard to find at first but the people found them. Some were speaking about screams from the underground prison. The cells were found , some people say they were locked electronically but they were opened. The detainees were released after being years in detention , one of them has been released there for 14 years !!!!!!!!!!! The detainees were blindfold and stayed in small cell without light !!!!!!!!!! Even the military police soldiers and officers were touched. 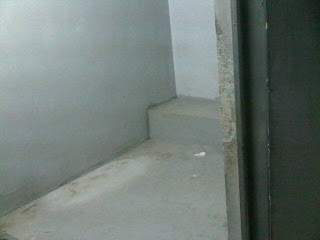 Inside the cell by Mohamed Abdel Aziz Our people there are careful so is the army , the people are protecting the documents till the DA arrives and already Judge Zakaria Abdel Aziz went there and asked for 20 young men to stay with him in order to protect. Judge Zakaria Abdel Aziz promised to search for the detainees in the underground prison.
It is not a matter of trust between us and the army but this is what we should do. The army knows that it should protect and hand these documents to the DA so it is better to let the people to do it to end to any suspicion from any kind. The army is careful not to let a single paper from the HQ searching everybody in the exist. It also does not let any foreign reporter inside , the thing which even protesters inside respected so much.
Among the people who came tonight to the State security HQ , families of the missing detainees , some of them have been missing for more than 5 years.
Here is a video showing the protesters when they managed to get in. They knew that there were underground cells and they found room full of papers. People were repeating over and over that they did not a single paper to be touched and they wanted someone to regard every office's door in the building.

Here is an ex-detainee how he was being tortured using a device that I showed its picture in the previous post.

This is just the start of the State security gate in Egypt.